Disney’s Camp Rock: the Musical is a massive Rock’n’Roll return to a Disney musical for Albury Wodonga’s BYTESized Productions, after the brave, but hugely successful production of Xanadu Jr. in 2018.

Disney’s Camp Rock: The Musical, is a combination of The Disney Channel’s “Camp Rock” and “Camp Rock 2: The Final Jam” (starring teen idols, Demi Lovato and the Jonas Brothers) and is a classic story of rivalry and power.  The show opens with Mitchie and her friends arriving at Camp Rock, ready to spend another summer jamming out and having the time of their lives. But the new, flashy Camp Star across the lake now threatens Camp Rock’s very existence. To keep the doors open, Mitchie steps up, rallies her fellow Camp Rockers and gets them into top shape for the ultimate showdown!

One half of last year’s directing team, Lauren Schmutter, returns to BYTESized but this time as sole Director, supported by choreographers Caitlin and Savannah Clarke (Kinky Boots), vocal coach Merryn Thorpe and Music Director of the live on-stage band Tim McLaren (Cats).  Schmutter said “We’re extremely excited to be bring this high-energy show to Albury-Wodonga. The production will feature all of the characters and songs from the film in a whole new stage production. More than 160 keen singers, dancers and actors travelled from as far as Wagga and Mt Beauty to audition and we’re extremely pleased with the talented cast we have assembled.  We were particularly impressed with the large number of kids new to BYTESized, with almost half the cast never having been in a BYTESized show before”

Even the younger cast are well experienced with all three of Livid Production’s Young Cosettes in Les Miserables appearing (Hope Chater, Ebony Banks and Georgia Wilson), and both Young Charlies in Albury Wodonga Theatre Company’s recent production of Kinky Boots (Connor Skillicorn, Rory Harrap) – all of whom have multiple performance experiences in both youth and adult productions.

A first for BYTESized, adult actors have been invited to play the minor adult roles, including stars of the local radio scene Riley-Rose Harper (as Camp Rock owner and all round good guy Brown Cesario) and Matt Griffith (as rival Camp Star owner and Cesario’s evil antagonist, Axel Turner).  Griffith admits that he is not terribly familiar with acting but says “the amazing talent of all the cast has driven him to rehearse his part to death, in case he embarrasses himself in front of the vastly more experienced, yet much younger cast”.  Harper on the other hand is a little more experienced having been involved in plays at high school and is having an absolute ball working with such a talented and dedicated young cast.

Disney’s Camp Rock: The Musical bursts onto the stage June 7 for three shows only at the Albury Entertainment Centre. 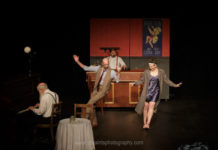