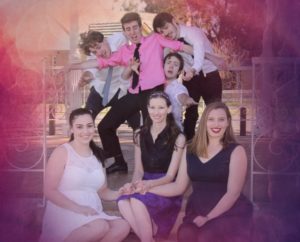 Maitland’s Reamus Youth Theatre is not only making sure their group of 16 to 25’s know their lines in this year’s Shakespeare play, but also how to deliver iambic pentameters – and a whole lot more!

According to Director Joanne McAndrews, Reamus is about creating an outlet for young people with a love of theatre, to develop their theatrical skills without the distraction of those enthusiastic but sometimes random younger teenagers, and without the influence of those “older” actors with preconceived notions of what acting is supposed to be.

After 16 years studying and working in Melbourne and the US, Maitland local McAndrews has returned to take the reins of Reamus, and what an effect she is having.  While this is McAndrews’ directing debut, with years of acting experience, much of it in Shakespeare, she is determined her young charges understand Shakespearean technique as well as text.

In her teaching and directing, McAndrews is focussed on the “rhyme and reason” that is Shakespeare – and her choice of Love’s Labour’s Lost is perfect to achieve this.  Full of witty wordplay and romantic poetry, this comedy has much for the young cast to get their teeth into.

But Love’s Labour’s Lost is not just about jokes.  The play is perfect to train cast in Shakespearean technique, with characters moving between verse and prose, and occasionally breaking into a sonnet.  And while iambic pentameter can scare even the most experienced of actor, McAndrews and the cast have spent time playing with those five iambs to show the method, and brilliance, of Shakespeare.

In much the same way, McAndrews undertook an exploration of the sonnet, its parts and rhyming structure, with some cast even writing their own, taking the skills of this group of young actors to heights mostly unseen in community productions of Shakespeare.  Taking what they have learned and applying it on stage, audiences can expect a Shakespearean experience of the highest quality.

Much of McAndrew’s approach has come from her experience learning from the best including  Robert Beltran (of Star Trek fame but better known in theatrical circles for his Shakespearean acting and teaching) as part of the Schiller Institute’s network of actors and teachers in the US.  Central to Beltran’s teaching is the use of language, counterpoint and how to use the whole body to live the character, and it is these qualities that McAndrews develops in her young actors.

McAndrews chose Love’s Labour’s Lost not only because of its humour, but because the play has many and varied roles for the cast.  This is not a play where bit parts abound, and each cast member gets the chance to show off what McAndrews has taught them.

The production components also allow the actors’ abilities to shine through.  With theatre in the round, simple costumes, and one scene staging, there is nowhere for the cast to hide.  Not that any will be looking to hide with their forthright abilities in Shakespearean acting that McAndrews has taught them. This production of Love’s Labour’s Lost will no doubt engage audiences from start to finish and should not be missed.