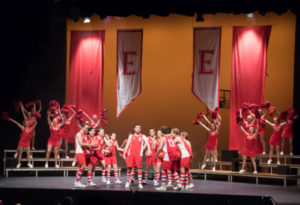 Gone are the days of school productions done in dodgy school halls, with terrible sound and not much more lighting than the florescent tubes above the “stage” stuck at the end of the basketball court.

Trinity Anglican College’s production of Disney’s High School Musical burst onto the big stage of the Albury Entertainment Centre, to an almost sell-out crowd, with all the professionalism you’d expect to see from a big theatre company – amateur or professional. 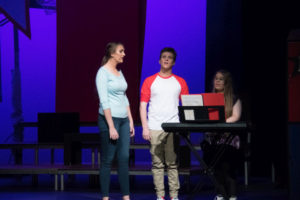 Perfect for a school production, High School Musical tells the story of the trials and tribulations of Troy Bolton (Jesse Challis), a star athlete at a small town high school, who falls for maths geek Gabriella Montez (Grace Draper) at a New Year karaoke party.  When they return to school they find a common interest in the school musical, and have to find a way to navigate their new found desire to audition with the demands of their school tribes.   Indecision and insecurity is a theme running through the story  – both eventually revealed as just surface appearances when the real characters become apparent as the story develops – and the moral of be yourself and let others be them too becomes evident.

The show’s writers knew High School Musical would be a favourite of schools around the world and ensured that from the opening note, colour and movement would keep the audience engaged – no matter how young they might be – and Trinity’s performance did not disappoint. 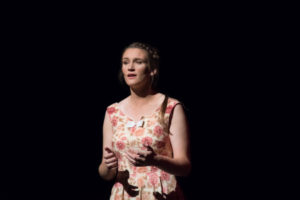 The principal actors lived the roles.  Challis was perfect for Troy Bolton; the swaggering, way too cool for school “hoop” and Draper as the demure maths geek, was the perfect foil to Bolton’s apparent sports jock demeanour.  On the surface the characters are polar opposites, but underneath both struggle with the classic school challenge of whether to be yourself, or to be what others want you to be.  Their excellent ability to play this range of dramatic characterisations was only matched by their singing abilities – particularly in the pair’s duets where they were able to reveal the emotions underlying their tough exteriors; with the short duet at the piano with the mousey composer of the musical Kelsi Neilson (played by Kierra Oates) just about bringing tears to the eyes. 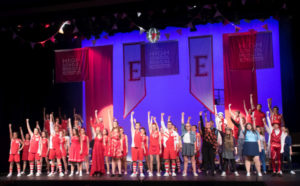 Supporting the two leads was a strong cast of featured roles – particularly Hattie Evans as Sharpay and Nic Lockhart as Ryan, who as the deliberately one dimensional drama club baddies, provided the comic relief to the story with their many and varied costume changes, choreography and great singing.  Chad Danforth (played by Will Cochrane), Zeke Baylor (Ethan Goodacre) and Teigan Shirley as Taylor McKessie were all excellent as key members of their respective school tribes, and newcomer Jack Watson, who as the school radio announcer kept the story moving with perfect comic timing. 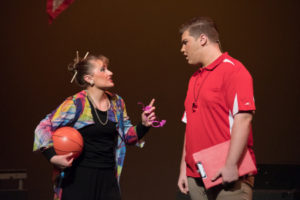 However for me the most memorable of the supporting cast was Elloise O’Connell who played the drama teacher Ms Darbus.  O’Connell’s ability to play the role with such persuasion even made this reviewer initially think the production team had used one of their real school teachers in the role.  O’Connell was utterly convincing, and at times almost stole the show with her perfect high school drama teacher mannerisms, voice inflexions and physicality which made me think she has experienced a few drama teacher in her time, and has learnt more from them than perhaps just what was in the curriculum!

A big school production requires a big ensemble to “give everyone a go”.  But this ensemble was not a bunch of extras used to fill out the stage.  The choreography, singing and acting was spot on, and the enthusiasm and consistent stage faces of every ensemble member showed that they had put just as much work into learning their parts as the principal roles.  It’s clear when an ensemble knows what they are doing because they clearly enjoy their time on stage, and this certainly rubbed off on those watching.  This was most evident in the “encore” of medleys which was a highlight of the whole show and left the audience with such a feel-good feeling that they will no doubt be back for more.  All this supported by an excellent Band of mostly school students under the direction of teacher Brett Spokes. 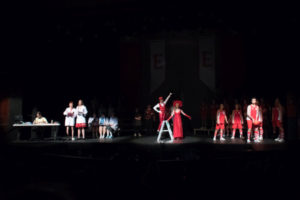 The simple but effective costumes, sets and lighting kept even the youngest of the audience engaged throughout.  Director and Production Manager Glenn Mancer kept the show moving with slick direction and minimal down time between scenes and set changes – facilitated by the simple but effective staging.  Even the final scene where the basketball game, audition and maths competition are staged simultaneously was effectively portrayed – an effect even some professional productions have struggled with.

Eventually all ends well and all the kids are delivered from moral peril when a solution is found to allow everyone to succeed.  And although such a convenient ending could be criticised as being somewhat unrealistic (it is a musical after all), the live and let live message is clear enough.  Perfect for a “high school musical”.

Trinity Anglican College is developing a reputation for superbly produced senior school shows, and this one certainly delivered.  This reviewer is definitely looking forward to the next one.

Seen a show you really liked?  Why not write a review and publish it on RatNews? See how to submit a review here.