If you have even a passing interest in theatre in regional Australia, you’ve probably noticed that things have been a little green around some of the larger, and not so large, regional centres about the place.

Wicked, the biggest musical of the 21st century, and still playing to packed audiences on Broadway, was made available to community theatre groups with the release of the non-professional rights in 2016 – and what an impact it has made on stages around the country.

CLOC Theatre Company in Melbourne started the whole thing off with their non-professional premier in May 2016, and since then regional theatre companies from Launceston to Rockhampton and everywhere in between and beyond have performed to sell-out crowds.

But in a two week period in May 2017, five regional theatre companies will perform the show, including an astonishing five simultaneous shows on the evening of May 21.

RatNews spoke with team members from all five theatre companies doing Wicked in May –  Coffs Harbour Musical Comedy Company and Orange Theatre Company in NSW, BLOC Music Theatre from Ballarat in Victoria, Mackay Musical Comedy Players in Queensland, and Albury-Wodonga Theatre Company in cross border NSW and Victoria – to find out their motivations, interpretations and challenges.  And to find out: just how do you put on one of the world’s biggest musicals of all time in regional theatres?

Every theatre company we spoke to identified the motivation for putting on the show in the first place was the massive spectacle that is Wicked.  The sets, the costumes, the lighting and those extraordinary moments on stage that quite literally defy gravity.  All of this supported by fabulous music, with soaring moments for the principle cast, underpinned by a strong ensemble score with striking harmonies requiring all cast to be particularly musically talented.

But while audiences might come to see the spectacle on the night, it is the strength of the story behind the song and dance that also motivated them to put the show on.  While the script itself reveals some of the story before (and during, and after) the well-known Wizard of Oz fairy tale, it is the moral lessons learned throughout the story that really makes the story relevant for today’s audiences.

Whether it is the simple moral of not judging others on their appearances, or as Tonia Beckmann from Mackay said, “The story shows how easy it is to be manipulated by others.  The emotional journey between Galinda and Elphaba develops to the point where they realise they have been manipulated.  Where one goes with the flow while the other stands up for what they know is right”, it is quite a moral story – a great lesson to learn as well as great entertainment.  This is taken even further by BLOC where the director David Hollywood has placed high significance on the role and importance of the animals within the show – evident from beginning to end. Another significant emphasis in BLOC’s production is the weather – the Great Drought that started it all – and there are implied links to the current environmental state of the World.

Each of the people interviewed emphasised that allowing the cast to develop their own take on the well-known roles was paramount.  Whether this was facilitated by reading the Gregory Maguire novel (as all in Orange’s production did) or just allowing the cast the freedom to develop their own interpretations, all were clear that a carbon copy of the Broadway performances of Kristin Chenoweth was not going to work.  This was particularly the case in Mackay’s production, where their Elphaba, Megan Mills, had never even seen a production of Wicked and so has been able to develop a freshness to the character unhindered by preconceived ideas.

And equally, each company made it clear that while the role of Glinda may on the surface seem ditzy and indeed “blonde”, each person playing the role must understand that underneath this veneer is a great depth of character that each leading lady needs to demonstrate.  Something that may stand these performances apart from those renditions of Popular in song nights and eisteddfods.

However, Wicked is certainly known for its big Broadway spectacle, the huge and complex sets, and the intricate costumes and spectacular lighting is what audiences expect when they first take their seats.

Such a challenging staging requires some creative responses, especially in regional settings.  Co Directors Glenn Mancer and Joseph Thomson of AWTCo were so impressed with CLOC’s production in Melbourne that when the set and costumes became available to hire “we just jumped at the chance”.  In fact CLOC’s set, contained in one enormous shipping container, has been travelling the length and breadth of the continent from Launceston in Tasmania to Rockhampton in Queensland before it made its way back down to Albury-Wodonga.

But with 5 productions on at the same time, not everyone could use CLOC’s amazing set.  Orange Theatre Company used a novel approach and teamed up with two other companies, Illawarra on the south coast of NSW and Miranda in Sydney to design and build sets and costumes that were then shared.  And while Coffs Harbour built their own set, they were able to hire the costumes from Tamworth Theatre Company.

But even when sets and costumes are hired, this still requires a huge number of volunteers to construct the set, alter costumes, find solutions to unexpected challenges, and seek out those extra parts of costumes, sets and props that make each show unique – including how to make those witches fly.

If, as is often the case, the theatre doesn’t have the facility to make the actors fly, then favours have to be called in.  Whether it was Mackay’s use of a rigging company in Brisbane, or AWTCo’s ability to call on the equally talented people from Albury’s Flying Fruit Fly Circus for assistance, it shows the depth of creativeness that is required when putting on such an extraordinary show.

But if a theatre company couldn’t, or didn’t want to hire sets and costumes, then it comes down to their legion of volunteers to design, engineer and build the whole thing from scratch.

“We always build our own set”, says BLOC’s Carly MacDonald, and with an expectation locally that their productions will have the ‘tricks’ that the Melbourne shows do, this presents challenges – always met.

In Coffs Harbour, their set  designer used inspiration from CLOC’s set which they saw in Ipswich and then used their legion of volunteers, including a “cracking team of retired gentlemen”, two of which are 78 this year, to build the bulk of the set.  And street artist Ash Jonnson known for spray can art around town, to paint the flats for the crashed house.

With no fly tower in Coffs and tiny wings, the production is using lots of projections.  Co-Director Dee Tune reported the best thing she loves about doing these flashy tech heavy shows in a regional setting are the challenges that are presented, and the creative genius that needs to be employed to overcome them and still make the audience believe that people can really fly.

Similarly Mackay has built their own set, inspired by the Broadway version, and has been able to reuse the engineering masterpiece that was the bridge used in their production of Les Miserables that can be flown in on stage.  Even though they have used well known aspects for their inspiration producer Tonia Beckmann says that director Marina Duncan has produced an almost steam punk feel to the set, with a huge number and array of cogs used throughout, without losing the true feel of what the original writers intended.

For those that designed and created their own costumes, the creative process was just as challenging.  In Mackay Beckmann reported their costumier “just about had kittens” when told of what had to be done, having just done Mary Poppins and Beauty and the Beast recently.  But with qualifications in fine arts and theatre costuming, and an excellent costume base that could be “attacked” to give the assymetrical look that the show sometimes has, it was a real challenge, but one to be enjoyed.

In Ballarat, the costumes, designed by Melanie Buckingham are works of art, the design and sewing team have been working since before Christmas. Every costume is individually designed, most have handcrafted hats.  “Emerald City is a spectacle that is too hard to explain” says MacDonald.

But whether or not a production hires some, most or all of the props, sets and costumes, as with all productions in community theatre there is a legion of volunteers behind the scenes to adjust and modify where required, and to design, engineer and build things where necessary – even calling on principle cast such as Mackay’s Fiyero (Jake Watson) who just happens to be an engineer and jumped at the chance to make the Wizard’s Head!

And all this stage appeal is supported by that other group of talented people, without whom the show just could not go on – and who are usually stuck in the sometimes incredibly cramped orchestra pit.  In regional centres those playing in the orchestra are often professional musicians employed as music teachers in local schools or regional conservatorium such as those in Albury and Orange.

In fact staff from one musically focussed school in Albury, Trinity Anglican College, make up no less than three members of  AWTCo’s production team including Co-Director Glenn Mancer, music director Brett Spokes, vocal director Jessie Swan, and a number of staff and students are in the cast including their Fiyero (Jessie Challis) and Nessa Rose (Emma Mancer).  Mancer goes further and says one of his foremost motivations in putting on major productions like Wicked is to develop the arts in regional centres, and to prove performances can be just as professional in the regions as anywhere in Australia.

The size of the audiences in these shows ranges from the more “intimate” theatre in Coffs Harbour which seats around 250, up to the bigger productions in Albury-Wodonga, Ballarat and Mackay where the seating capacity is between 800 and 1000, and the number of shows ranges from just four big shows Mackay, to a massive 16 shows in Orange.  All up, a total of more than 27000 tickets will be available for these shows.  A huge investment in regional theatre.

And why May?  Well in most cases it is a matter of practicality.  It takes about four months to rehearse and put on a big musical – and while preparations for all productions began well before Christmas, things begin in earnest once everyone returns from summer holidays – and any later, things start to get a bit cool to venture outside to all those after work rehearsals – especially in places like Orange and Ballarat!

Wicked is a spectacle to be experienced.  And regional Australia is fortunate indeed to have so many theatre companies with the professionalism, expertise and talent, supported by an army of dedicated and equally talented volunteers, to design, create, produce and put on such brilliant shows.  If you have the opportunity to get down to a theatre in your nearest regional centre, this May or at some other time in 2017, you won’t be disappointed.

Want to keep up with RatNews?   us to follow our updates, news stories and features. 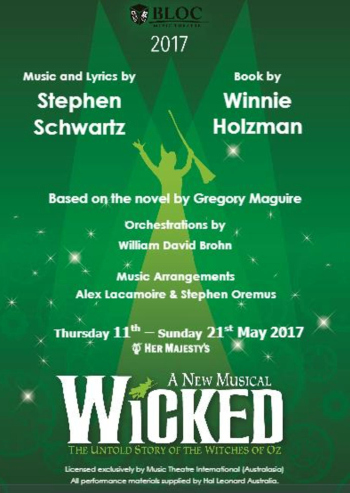 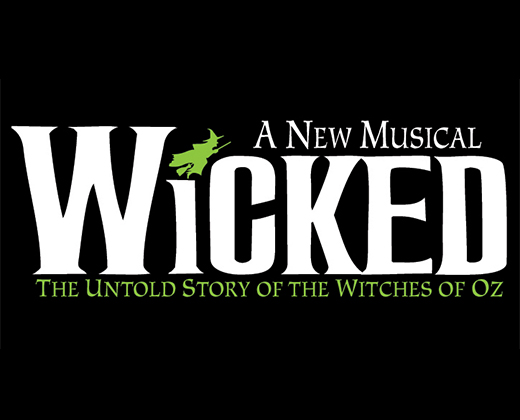 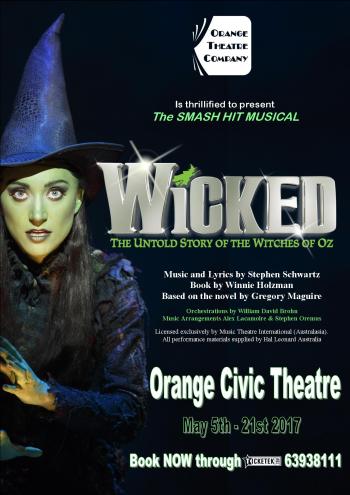 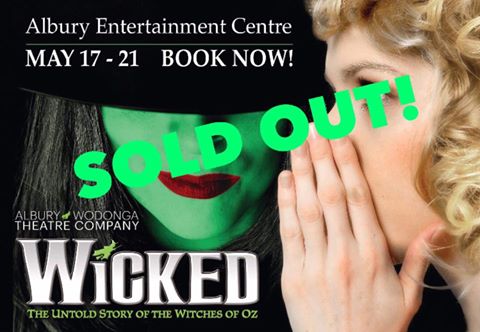