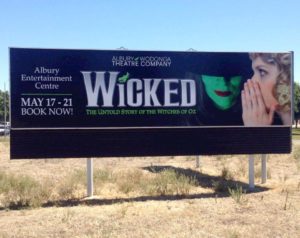 Albury-Wodonga is turning a shade of green lately.  You may have noticed the images of witches (green and blonde) appearing in posters along streets, in your mail box or even strung up on any available fence around town.  Plus the rather large poster you can’t really miss as you drive north along Melrose Drive.

Rehearsals for Albury-Wodonga Theatre Company’s Wicked, the Untold Story of the Witches of Oz, are well underway with less than two months before opening night.  With a cast drawn from across the region, and beyond, the three months of three times a week rehearsals can seem to last forever, but no doubt opening night will be upon them in a blink of an eye, or perhaps a wave of a wand – with or without a point.

Venetia Heath, her booming high soprano voice well known to Border audiences in classical settings, and also while playing female leads in Livid’s Sweeney Todd in 2015 and Annie last year, is learning to flick her hair in the comic-tragic role of Galinda.  With the other lead witch benefiting from the extraordinary skills of two talented singers, Amy Murray, well known for many roles for AWTCo including Oliver! and the Last Five Years, and Catherine Cunningham who’s last role for AWTCo was as Bet in Oliver! – coincidentally supporting Amy Murray’s Nancy.  Catherine is returning to the stage after a year of acting training with Hot House Theatre, and no doubt this production of Wicked will benefit greatly.  Amy and Catherine will share the role, each performing in three of the six shows in May.

Talented men are also represented well.  The role of the Wizard is being played by returning local John Parry, recently seen in The Other Theatre Company’s production of Macbeth, and high school students Jessie Challis perfectly cast for the swaggering role of Fiyero, if his performance as Rooster Hannigan in Livid’s production of Annie is anything to go by, and Josh Jones playing the unlikely hero Boq.

The cast are well supported with a large ensemble of experienced singers and dancers, with the fabulous score supported by an equally talented off stage vocal ensemble.  So keep an eye out for some green around town, and perhaps a glimpse or two of a witch, and even a flying monkey.  For you too deserve to the chance to fly.