WICKED The Untold Story of the Witches of Oz

Encore Theatre Company’s production of Wicked at the Princess Theatre in Launceston, was a musical which defied theatrical gravity. Simply put, it soared. 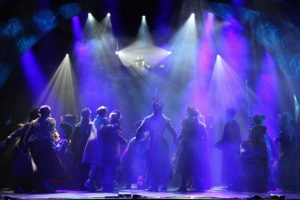 Much of its lofty success was due, in part, to production values rarely seen, if ever, in Launceston by an amateur company. Thanks to Chris White, the stage was filled with an array of spectacular sets that were atmospheric and created a real sense of otherworldliness. Jason Bovaird’s dazzling and elaborate lighting design conjured a magical sense of time and place that was simply stunning, while the amazing costumes added another visual dimension to this theatrical spectacle. Coupled to this visual feast was Marcello Lo Ricco’s sound design, which brought clarity and balance to the show.

However, sets, costumes, lighting and sound are but one side of this outstanding musical equation. The cast and crew of Wicked matched the excellent platform provided by Encore and gave superb voice to Stephen Schwartz’s score. 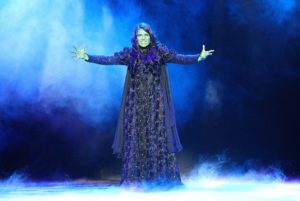 The talented and experienced Director, Liz Bennett and her creative team, have realised a vision that captured the spirit of this all too relevant tale of friendship and tolerance that stood defiantly in the face of fear and ignorance.  As Elphaba, Abbey Hansson wove her magic once again at The Princess and gave a stellar performance that was both captivating and complete. Her wonderful stage presence and vocal skills were simply amazing. Hansson’s star is forever rising to new heights. 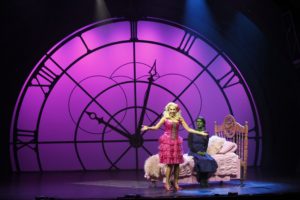 As the comic counterpoint, Alana Lane’s perky and very “blonde” Glinda, was the perfect foil. The vocal interplay between these two wonderful leads was one of the many high points in the show.  Frank Kerr’s Fiyero, had an equal mix of swagger and sensitivity necessary to carry off this role. He possessed arrogance and understanding in equal measure and had the theatrical skills to make this role his own.  Kerri Gay and Ross Marsden revelled in their respective roles. Gay’s menacing Madame Morrible was wonderfully nuanced and calculating, while Marsden as the Wizard had the hollow vaudevillian showman down pat.

Travis Hennessy, Nikia Breen and Cheyne Mitchell rounded off the central characters and each gave performances that were appropriately layered and at times sensitive.  They were the collateral in this swirl of magic and madness. 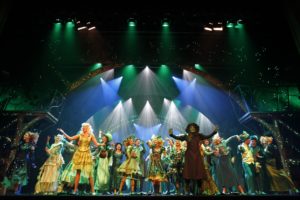 The chorus, or more correctly “the Citizens of OZ”, were collectively outstanding and were central to the show’s success. Their unbridled enthusiasm, energy and their execution of the production numbers lifted the show. Their vocal harmonies, courtesy of Denise Sam and choreographic routines realized by Jacquelyne France-Marsden, were taken to lofty heights by this disciplined ensemble.

Underpinning the visual magic was Matthew Dudfield’s Musical Direction. A veteran of innumerable productions, Matt and his Orchestra may have been unseen but they certainly gave the actors a superb musical backdrop and were not unsung.

Having seen three “Wickeds”, in less than four months, comparisons can cloud opinion. Some characters were stronger here and some weaker there. However, as a show, Encore’s production was the complete package.  Belinda J King, Ross Marsden and Jamie Hillard as Executive Producer’s continue to build the company’s reputation in Launceston.  As an audience, theatre goers are the richer for their tireless efforts in bringing outstanding works to the stage.

This show could stand on its own anywhere. It was spectacular!